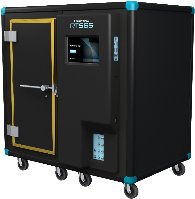 BLUETEST of Gothenburg in Sweden produces reverberation chambers and software for the fast and precise test of equipment with electrically small antennas like RF transceiver modules, mobile phones and tablet PCs using wireless standards such as Bluetooth, WiFi, ZigBee, GSM, UMTS and LTE.
The chambers measure: Information about the measurement accuracy can be found here: pdf Bluetest measuring antennas

For WiFi and LTE terminals with MIMO antennas the reverberation chamber is the only possibility to directly measure: Measurements can be made 10 times faster than with usual methods in anechoic chambers:


Over-The-Air-Test (OTA) according to CTIA and 3GPP

The Bluetest reverberation chamber is a candidate for the Over-The-Air-Test (OTA) of MIMO-terminals according to 3GPP and CTIA.

The new measurement chamber of Bluetest simplifies and accelerates OTA measurements with:

RTS95 is optimized for the frequency range 400 MHz to 6 GHz and for large DUTs.

Among BLUETEST's customers are many renowed manufacturers of who shorten the product development time and improve the performance of their equipment with Bluetest reverb chambers.
Publications regarding reverberation chambers can be found here.

Within the sixth frame program of the EU a comparison was made by the Antenna Centre of Excellence. The test results show that BLUETEST chambers perform similar or even better than anechoic chambers, with a standard deviation of only 0.5dB. www.antennasvce.org

For throughput measurements of MIMO-access points and MIMO-terminals operating in the ISM-bands at 2.4GHz and 5GHz or with LTE, Bluetest has developped the  ISS11 attenuator system.

ISS11 is ideal for measuring IP-throughput over power level of LTE or WLAN  IEEE 802.11ac. It supports MIMO up to 4x4.